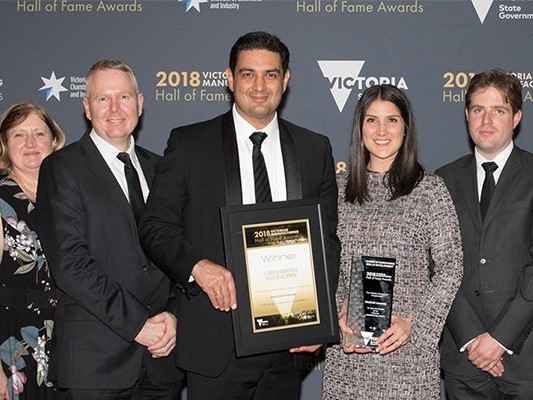 “It is gratifying to be recognised by the government for our work in manufacturing and skills development. We are immensely proud of our long history of manufacturing Kenworth trucks in Australia and the work we are undertaking to secure our position as the pre-eminent truck manufacturer in the country with a highly skilled workforce,” said Andrew Hadjikakou, Managing Director of PACCAR Australia.

The Manufacturing Hall of Fame Awards, established in 2001, showcases and recognises the breadth and depth of companies and individuals involved in manufacturing and innovation within Victoria.

This Award recognises the investment undertaken by PACCAR Australia in skills development of its employees, suppliers and dealer network associated with the design, launch, manufacture and aftermarket support of the Kenworth T610. The Manufacturing Hall of Fame also recognised PACCAR Australia’s recent milestone achievement of having manufactured 60,000 Kenworth trucks in Australia.

PACCAR Australia employs more than 1,100 people directly, and many thousands more through its independent dealer and supplier networks. Its supply chain includes approximately 70 major Australian suppliers located across the country, with many of those being locally-owned companies located in the Melbourne region. Depending on the model and specification, a Kenworth truck comprises around 60 percent Australian-owned resources.

“Production of Kenworth trucks continues to increase and, with our announcement at the end of last year that assembly of DAFs will commence in the third quarter at our Bayswater Production Facility, we are optimistic this will contribute to further growth in the state, and the country.”